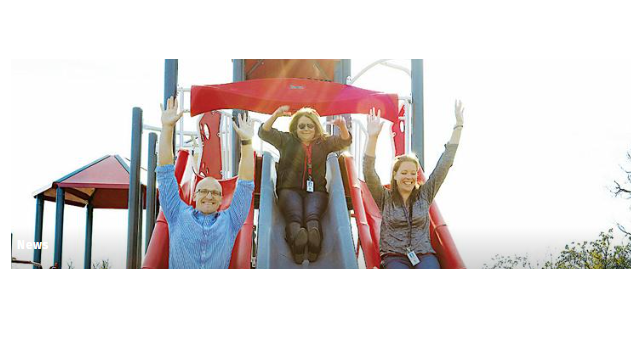 At Catoctin Elementary, a Refresh is Celebrated

With the start of the 2022-23 school year, Catoctin Elementary School in Leesburg—a 56-year-old school—opened with some significant upgrades it hadn’t had in 23 years. It’s a model parents at other aging Loudoun County school buildings are hoping to emulate.

Renovating the school took the cooperative work of the school staff, the school district, the PTA, students, and even some money from the Town of Leesburg.

The school, which was built in 1966, is known as a pod school because of its circular design and 10 classroom pods. It was built for $1 million and was designed to accommodate 600 first through seventh grade students, according to the school’s website. There are two with that design in Loudoun County Public Schools; the other, now the Hillsboro Charter Academy, opened the same year.

Later in 1972, when the Simpson Middle School opened, Catoctin shifted to serve students from kindergarten through fifth grade. It got major additions in 1974, 1983 and 1999.

The newest additions to Catoctin Elementary include a more secure front entrance, three new classrooms, a new playground, and upgrades to the school’s energy efficiency. The classrooms alone cost $3.5 million, according to the school district’s Capital Improvement Program.

The playground was created with a mix of fundraising and the input of the kids who play on it.

While the school’s PTA was fundraising for a new elementary school, Catoctin Principal Janet Platenberg said, the school surveyed then third grade students to see what they wanted in a playground. Those students, now fifth graders, opted for more slides and swings and got to see those wishes come to fruition.

Platenberg said the school division worked with them to make the kids’ wishes come true.

“They were good about letting us tell them what the kids wanted. We were able to incorporate all the things the kids really wanted and make it an all-inclusive playground and accessible,” Platenberg said. “It’s phenomenal. The kids love it, it’s all they talk about.”

Leesburg Town Councilman and Catoctin Elementary parent Zach Cummings said the school’s PTA had already raised about $25,000 for a new playground when the town decided to pitch in.

“It was a pleasant surprise, especially for me, for Catoctin, because it’s one of the oldest elementary schools to be able to get those kids a new playground. We’ve got to keep improving and upgrading our schools because people want to live in Loudoun County,” Cummings said.

Brand new playground equipment at Catoctin Elementary School. The school got an upgrade thanks to a partnership with Loudoun County Public Schools and the Town of Leesburg.

The town collects proffers from residential development on behalf of Loudoun County and Loudoun County Public Schools. The proffers are held by the town until the school division requests the money and are reserved public schools related capital projects. On Jan. 25, the Town Council approved reimbursing the school division for $1.13 million for the cost of playground equipment at Catoctin and three other elementary schools in town, Cool Springs, Frederick Douglas Ball’s Bluff, and John W. Tolbert Jr., and Smart’s Mill Middle School, according to documents from a Nov. 9, 2021, School Board meeting.

Other renovations to the school were designed to make it safer and more energy efficient. Platenberg said before the renovation, there was a cement wall that blocked the view of the front entrance from the office. She said it was hard to see whether visitors made the right turn into the office or if they continued down the hallway without checking in.

“That was always an area of big concern for the families and the staff,” Platenberg said.

Division of Construction Services Assistant Director of Design Melissa Tello oversaw the projects at the school. She said they worked with a team of consulting architects and engineers and the school staff of the school to create the new front office and vestibule to fit in the existing footprint.

“We did not expand the building in this area, but we had to do some pretty significant modifications in the area to reuse this space and bring back transparency at the entrance,” Tello said.

Platenberg said that included some reworking of offices, including hers, which was not part of the front office.

And the new classroom space gave the school the room to make those improvements without losing office space, even gaining a teach work room.

The school saw a 4,300-square-foot addition of three kindergarten-sized classrooms with bathrooms, a couple of work rooms and two larger conference rooms. Platenberg said the conference rooms are being used for Special Education resource rooms. They are also using the extra classroom space as an art and music room.

Catoctin Elementary has building capacity of 743 students, and this year’s enrollment of 605 students puts the school at 81% capacity.

She said having the extra classrooms brought extra storage space, which is being put to good use.

“Knowing how an older home or school doesn’t have enough closet space, there is a huge storage unit in there which was just an absolute bonus for us because we are using that space to archive school historical materials like yearbooks from the year it opened, pictures and floor plans,” she said.

The final project was upgrading some infrastructure to make the building more energy efficient. Tello said they updated the fire sprinkler system throughout the school, updated lights with LED replacements, installed a complete HVAC system replacement, and brought in solar panels.

The panels serve a dual purpose. Not only do they offset electrical costs, but they serve as a science lesson during the day.

Platenberg said the students can check a TV monitor and see just how many kilowatts of energy were saved each day.

“They can look at how the changes have impacted their environment and their classrooms,” she said.

Platenberg said she appreciated how Tello and her team took the character of the school into account when doing the renovation and kept the culture the same while bringing it up to date.

“It is a refresh, not a new look, but it fits perfectly,” she said.

The two-year process and 4,300-square-foot addition was complete by the time school started. Tello said it took some time for the projects to come to fruition, but she said they are happy the staff is happy.

“Honestly, what it means to us as a school community, families just feel like this huge injection of pride that Loudoun County Public Schools is taking care of an older building and also making sure the kids and the families have equitable workspaces. This has been huge for Catoctin,” Platenberg said.